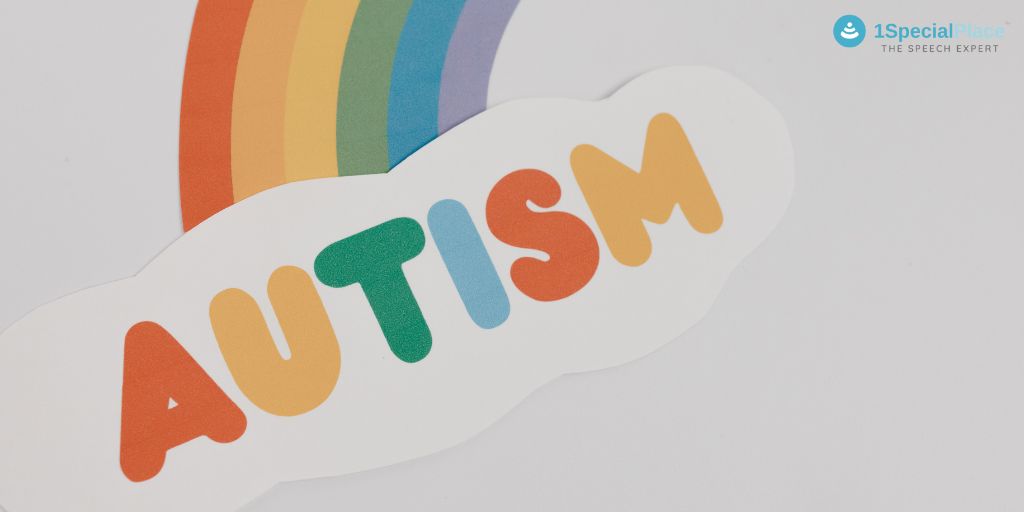 “Understanding is the first step to acceptance, and only with acceptance can there be recovery.”
-J.K.Rowling

This is an inspiring story of Appu the ‘warrior’ as his father rightly describes him! What makes this child special is not being on the Autism Spectrum disorder, but his uncompromising fighting spirit against all odds and unleashing his unique gifts and talent. Through this interview, Mr.Sanjay and Dr.Rema describe their unique and special journey of parenting their special son Appu who is the source of inspiration for everything they do.

1. Please introduce yourself and your son to our readers.

My name is Sanjay and I am CTO of Vigyanlabs Innovations, a successful start-up in Energy management space. My wife Dr. Rema is a Post Graduate faculty in Oral radiology and medicine.

Appu was born as the second most premature kid in medical history of Apollo hospitals in 2009. He was only 700gms, less than a palm in length with totally collapsed right lungs and high premature organs. But even at this level of prematurity with almost no lungs – he cried when he was born and had an APGAR score of 9!! That was only the first of a long series of surprises as a warrior he was going to give his doctors and the world. He spent 75 long days in Neonatal ICU at Apollo.

This struggle took away hearing from one of his ears. It also left him with severe developmental delays coupled with moderate Autism and severe sensory issues. He only had 10% chance of survival as per our neonatologist when this journey was starting. However, he was surprising the battery of doctors every day with his extreme fighting spirit. At every point they were giving up, he fought his ways through it which his doctors still claim as miracle beyond medical science. Lung collapse and revival episodes were common every day for weeks together.

One day in our usual routine of day long waiting outside NICU to hear any news – we overheard a group of doctors talking about him in cafeteria saying that the kid is a warrior from whom they should all learn. And that is when we realized how much we miss to notice the warrior spirit in our kids in spite of all adversities relentlessly thrown at them. They don’t get depressed, they don’t give up, they never ever lose the fighting spirit even an iota of it.

Our journey transformed since then. The fighter came out after 75 long days almost unscathed excepting losing an ear in the long lonely battle – but hey, that is a small loss for the ferocious battle that took place in that NICU against all odds by someone who hardly had any physical body. And now after 7 years, he still has a long, long way to go. He is still nonverbal, but can communicate better than most of us for his needs. But he is cracking day in and out almost every physical, sensory, cognitive and motor challenge that is thrown at him teaching people around him repeatedly that money, power, health and favourable physical body and all those things we consider important for happiness and fighting spirit are meaningless.

Now at 7, he displays his potential in alphabets and numbers and phonetics by writing spellings of SAXOPHONE and XYLOPHONE without any help (which probably I wrote correctly at 13 years’ age). His sensory issues and motor execution issues are immense still – he still can’t hold a pencil and write without support, but he will crack them for sure. Letters and numbers excite him so much that it is a sensory ocean on any outside travel because roads are all filled with alphabets and numbers in various billboards and posters.

2. When did you discover that your child has Autism?

Appu is a combination of severe developmental delays coupled with moderate autism and loads of sensory issues. Appu’s struggles started at birth itself and there was no specific event when we noticed there was something coming up. Every step of his journey was a fighting spirit of a warrior.

Our greatest teacher in this journey of last 8 years was Appu himself. Physical body and health, supporting sensory system, money, power and knowledge and all those we consider important for giving us strength and happiness – he showed us that – none of these are pre-requisites for fighting day in and out, the fight goes on in pure joy derived from the fight alone. That is life you see all around in plants, animals, birds and all around, which adult homo sapiens forgot somewhere on the way to becoming modern humans. If a tiny little human of 700 gms with hardly any physical body could fight all such odds and come out fairly unscathed overturning all predictions by doctors about his survival – what is it that we cannot achieve with all such supporting systems, physical body and strength?

Autism was an unknown word to us till he was born. Years and years of study and intense interactions in Autism related groups and parent forums followed. But very soon we realized that parents are the best therapists and Appu himself is the best teacher on what is Autism.

4. How important are therapy services for your child? Has it helped him and your family?

The biggest therapy for Appu was unconditional love and his best therapists were his parents. Rest everything was supporting system making that happen. Appu was under therapies from birth. He had very early intervention on his Oro-motor issues, physical issues, muscular tone issues, speech development, cognitive development and so on.

He also went through horse riding as therapy, music therapy, listening program, Auditory Integration, ABA (for a short duration), play therapy which all helped him in minute steps for his progress.

5. Tell us about some of the positive lifestyle changes you have made that has helped your family cope with the challenges of bringing up a child with Autism?

As a family, meditation was a constant companion to us – as we were used to it for long. Being cantered in ‘YOU’ and not on the physical body imparted all positive energy Appu needed for his growth. We strongly believe that health (both physical and mental) of parents play the biggest role in helping the child.

This helps undertake every bold step and new therapy for the joy of the journey and every subtle progress rather than with a violent attachment to results comparing him to other kids and how he should be.

Physically our lifestyles were always healthy and Appu imbibed those. It was perhaps two decades ago that we took sugary drinks and so on. Appu is on a Gluten and Casein free Satvik diet which we feel has helped him immensely in controlling his hyperactivity. Sugar and table salt are out of our plates for a long time. Refined flour also has no place in our house for several years.

Most of our preventive and curative medicines are natural herbs and Ayurveda, which helped us and him immensely. It would be surprising that Appu cured himself of Dengue last year with no allopathy medicines but with natural herbs and high dose vitamin C. It would also be important to state that we have not given him or we have not taken for ourselves any anti biotics for a decade now. Our experience (not belief) says that nature, nutrition and Ayurveda has cure for every problem we ever had in last decade or more.

6. Tell us about some areas where your child has made progress over the years?

Appu is still nonverbal but has started showing tremendous potential with alphabets and numbers over last year. He can write any word listening to it with phonetics with 100% accuracy. The first time he heard the word “naughty” – he wrote the correct spelling. He is a surprise to us and therapists on his alphanumeric skills. He can type multiplication tables like 12×17 without blinking an eye. Below is his own understanding watching news channel when our Prime minister was visiting Israel and meeting Nethanyahu. This information was gathered from news channel himself. 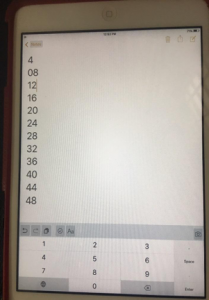 He understands concepts of cubes and square roots himself. Almost all of this was self-taught by him, he says (He writes “SELF” as answer to when we ask who taught him).

He is also very good at typing on ipad after couple of months training now. Appu still has severe disability to hold a pencil and write by himself. Appu needs support in his elbow by someone and letters don’t restrict into areas we want him to. 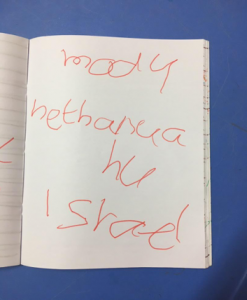 Following is his idea of how to distinguish a BOY (moustache, beard and short hair) from a girl (bangle, long hair, ear ring) 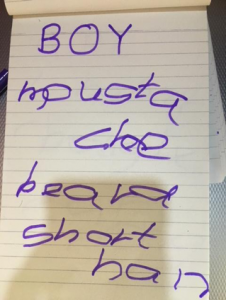 Following is his description of his visit to Mysore. What is to be noted is the first and foremost thing he saw in Brindavan garden. It is all about “crowd” ? 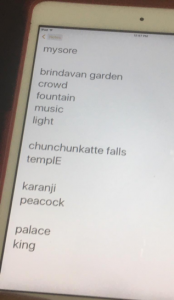 He is also improving on his physical skills. Below is Appu, climbing 25 feet long pillar climb and jumping. You can also see his rock climbing and rope climbing. You can watch Appu doing the 25 feet pillar climb here –https://www.youtube.com/watch?v=I2_z8UFxbu4 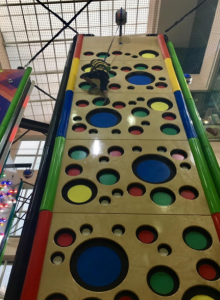 7. Can you share some strategies or techniques that has helped your son communicate better?

We also tried to find out what is the easiest and quickest way to make him communicate with an open mind keeping traditional approaches at bay. We realized writing with his fingers was fastest. A lot of iPad applications also helped us in this journey.

8. Can you share one behavioural strategy that has helped reduce his problem behaviours?

Diet was #1 in modifying his behaviour. Strict Gluten Casein free Satvik diet helped him overcome most of his behaviour issues. Second best behavioural intervention is unconditional love and affection.

9. What is the best thing about your child you want the others to notice?

We want him to be noticed as a human being among all of us and variety of living species we have. Every human has uniqueness and acceptance is core to humanity. We lose humanity the moment we lose acceptance and inclusion. Inclusion is not a certification or graduation school topic, it is simple humanity in action on every step. We also want the world to notice his skills on alphabets and spelling and numbers which are hard for him to be expressed in usual evaluation methods – but it is clear the immense ocean of skill is coming out via several other expression modes as you can see. There is a lot of hype these days around the words Special Education and Inclusion. In fact, our experience says that the underpinning for both of these is humanity and common sense. Applying both of these abundantly helps the child immensely.

10. Your advice to other parents who have children with Autism Spectrum Conditions?

People may say all these are good to say, but difficult to implement. Every day that passes with good things which remain as ideas, is a day wasted. Any amount of effort and struggle to achieve these will be worth every bit of it.

We thank Mr.Sanjay and Dr.Rema for sharing their story and some wonderful insights they have gained from their journey and wish Appu a joyous and a fulfilling journey ahead!

“The higher we reach the more we get tested”

“We need to grow through our challenges, smile in the face of hardship and become strong enough to live our heart song!”

Please spread the hope and inspiration by sharing the article! We would love to hear your thoughts on this!

Recommend someone who you think is a Little Miracle and we will feature them! Mail us at info@1specialplace.com