AAC for Children with Autism

AAC for Children with Autism One of the major struggles faced by children with autism is their inability to effectively communicate with others.

While some kids with autism can produce speech, they may not always be able to use these utterances meaningfully to communicate with others. Whereas, some others could be completely ‘non-verbal’ and might not be able to produce speech at all. Although speech is the most commonly used mode of communication among humans, we need to understand that it is just one among the multiple communication modalities. The other ones being pointing to pictures or symbols, showing gestures, facial expressions,  writing, sign-language, using communication boards, speech-generating devices such as Tab, computer, etc.

Read here about Tips for teaching AAC to children

The most important rationale behind devising AAC is that it supports speech development in individuals with autism. Another reason relates to the fact that many children with Autism are unable to use their speaking skills in a meaningful or functional way and using AAC thus enables them to develop improved communication skills regardless of poor oral language. AAC has also been found to be effective in reducing problem behaviours in children with autism. When a child with autism finds it difficult to convey his needs and feelings through speech, it may create frustration in him which then gets exhibited as a meltdown or a tantrum. AAC through its wide variety of options allows children with autism to express their feelings, wants, and thoughts in a mode that could be easily understood by others. AAC caters to the specific needs of each child and provides a range of options to choose from, based on the skills they possess. The majority of children with autism are visual learners as they process visual information better than auditory information and AAC allows them to communicate through the use of visuals, such as in PECS, communication board, VOCA, etc.

Listed here are some of the AAC systems used extensively in promoting communication among children with autism. 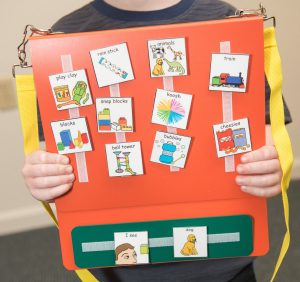 Training a child to use PECS involves a total of 6 phases. While in Phase 1, the child learns to independently pick up a picture card and hand it to a communicative partner near him in exchange for a preferred item, food, or activity, he further moves through the next phases eventually to phase 6, where he is taught to answer questions regarding what he wants, what he sees and to comment on his surrounding in phrases/sentences.

It is interesting to realize how we all communicate in many different ways in our day to day lives. We may talk, show gestures, vary facial expressions, and write emails to each other.  Similarly, a child with autism can also use a multimodal approach using AAC by combining the use of unaided and aided communication systems and both low and high-tech setups to communicate effectively. Whilst the benefit of AAC may vary from child to child, it can be stated that it helps in promoting independence, expanding communication, and increasing social interactions in children with autism.