What is Childhood apraxia of speech CAS?

Childhood apraxia of speech (CAS) is a motor speech disorder that affects a person’s ability to organise the movements of the muscles used in speech. CAS is a neurological disorder that affects the brain pathways involved in planning the sequence of movements involved in producing speech. The brain knows what it wants to say, but cannot properly plan and sequence the required speech sound movements. The person has difficulty making speech sounds voluntarily and stringing these sounds together in the correct order to make words.

Childhood apraxia of speech can continue into adult life. CAS is not caused by weakness or paralysis of the speech muscles (the muscles of the jaw, tongue, or lips). The difficulty seems to occur because of a breakdown in the program of movement sent from the brain to the muscles. This does not mean that the person has an intellectual impairment.

The severity of CAS varies from person to person. It can be so mild that it causes trouble with only a few speech sounds or with pronunciation of words that have many syllables. In the most severe cases, someone with CAS might not be able to communicate effectively by speaking, and may need the help of alternative communication methods. What are the signs and symptoms of childhood apraxia of speech in young children?

Some characteristics, called markers, help distinguish CAS from other types of speech disorders. Those particularly associated with CAS include:

Articulation errors may include: 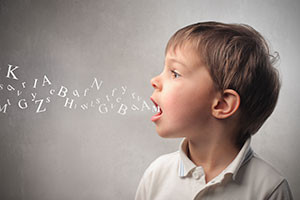 When child is younger than 3 years old and

When child is older than 3 years old and

There are some other problems that the child may have that could put her at risk for CAS. These include:

Other problems associated with CAS

A child who has a diagnosis of CAS may also experience:

Causes of Childhood Apraxia of Speech

CAS is a motor speech disorder. Something in the child’s brain does not allow messages to get to his mouth. Most of the time, the cause is unknown. It is possible that nothing would show up if you had tests done, like an MRI or CT scan of the child’s brain. This can be frustrating as you look for a reason for the child’s speech problems. 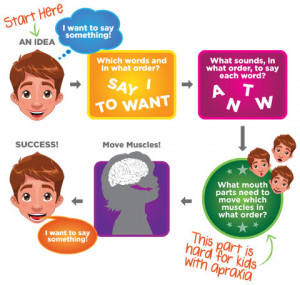 How is apraxia of speech diagnosed?

Currently, there is no validated list of diagnostic features differentiating CAS from other childhood speech sound disorders, including those due to phonological-level delay or neuromuscular disorder (dysarthria). However, three segmental and suprasegmental features consistent with a deficit in the planning and programming of movements for speech have gained some consensus among those investigating CAS:

For the testing of oral-motor skills, the SLP will:

For the testing of the speech melody, called intonation, the SLP will:

For testing how the child says sounds, the SLP will:

How is apraxia of speech treated? Type of treatment a child with CAS should work with an SLP. Research shows that the child with CAS will do better with therapy 3–5 times per week. As he improves, he may need treatment less often. As the child works on learning to make sounds and words, it is better for him to be seen alone. A group may be good when he works on using sentences to talk with others.

The child must practice speaking to get better at it. It helps to use all of his senses as he learns how to say sounds. He may use “touch” cues, like putting his finger on his lips when saying the “p” sound to remind him to close his lips. Or, he may use visual cues, like watching herself in a mirror. Hearing how he sounds on a recording can help, too. This sensory feedback can help your child repeat sounds and words and start using them in longer sentences.

Some children with apraxia have a hard time saying anything at all.

Sindhushree
Speech Therapist and Audiologist at 1Specialplace
Sindhushree has worked as a Speech language pathologist and Audiologist for 5 years dealing with both assessment of speech and hearing disorders and also worked on Development of Training Materials. Currently she works as a Speech Therapist at 1SpecialPlace and also contributes to the blog