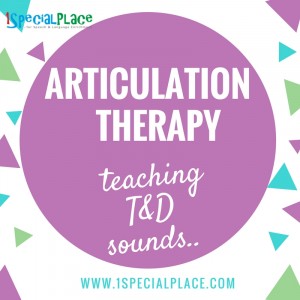 The sounds /t/ (as in tomato) and /d/ (as in dig) are lingua-alveolar plosives. The name ‘plosives’ comes from the way the sounds expel air when being said. And ‘lingua-alveolar’ is descriptive of the position of the tongue when the sounds are produced.

If these sounds are misarticulated, a speech therapist will assist in bringing an understanding of how the sounds are made and sound, then establishing them, followed by strengthening and generalizing them. 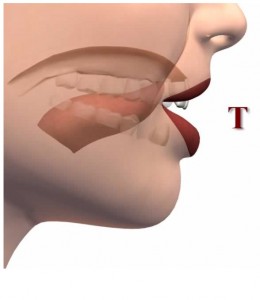 The sound /t/ is produced by touching the tip of the tongue on the ridge, just behind the upper front teeth – while the lips stay gently apart. Each time the sound is to be produced the tongue quickly touches its position and then is released with a burst of air or ‘explosion’ of air from the mouth.

The sound /d/ is produced with the same position and movement of the tongue, lips, and air, with an addition of voicing (i.e. vibration at the throat level).

First, check if the child can lift the tongue. If not, then there is a need to work on tongue strengthening. It may include simple games to learn to raise the tongue. Initially, it will be with the support of a tongue depressor, spoon etc.. Thereafter learning to raise the tongue and remain raised for some time without support.  Repeated and regular exercise is needed for the tongue to be raised independently. Get more ideas about this from your speech therapist. (Read about tongue tip elevation in our article)

If the child can raise the tongue, however placement is incorrect during the production of the /t/ sound, then begin by playing these games to Establish it.

* Note: Before working on producing the sound, listening to and identifying the /t/ from the /d/ sound may be taken up by the speech therapist. Take guidance from your speech therapist about the need for this and how to work on the same.

Voicing differentiates the sound /t/ and /d/ (as was the case for /p/ and /b/ sounds).  Let the child learn the /t/ sound, thereafter work on voicing. Take tips from the previous article in this series (link is here).

Always keep the learning multisensorial (i.e. use multiple senses together such as those of touch, and hearing). Some children may take more time to learn this skill than others. Be patient and repeat several times, without putting too much pressure on the child.

When the child learns voicing, get him/her to understand to ‘turn on’ voicing for the /d/ sound.

Achieving the sounds /t/ and /d/ in isolation is the beginning. Hereafter, there is a need to engage the sound in syllables (i.e. the sound along with other a vowel) and several longer utterances.

In Syllables. Practice the sound with a vowel placed either before or after it. Having a visual by using a syllable wheel is encouraging for the learner. Get the child involved when playing games of saying syllables.

Play it as a game (e.g. spin the wheel to land on a vowel to say along with the /t/ sound – a variation of wheel of fortune) or say it along taps (e.g. tap a beat on the table or using a xylophone or drum).

In Words. Read about how to build a work list in a previous article here (https://1specialplace.com/?p=4211). Practice a work list through fun. Here are a couple of game ideas:

In Sentences. If the child can use the sounds well within words, then move on to practicing sentences. At first, short sentences should be used – two to three-word sentences. Follow this with longer sentences and paragraphs/stories.

Create a list of sentences with the sounds for the child to practice. For example – (1) Tick tock. (2) The turtle turned away. (3) Tina’s tiger tickled eight cats!

Make practice fun. Use the sentences to make and play fun games. For instance, a game of ‘Roll the dice’. Form a list of 6 sentences numbered one to six. The adult and the child will take turns to roll a dice. The sentence with the number the dice lands on needs to be said out loud. Get a point or sticker for each sentence spoken correctly. Having a fun big dice is wonderful for this game.

Books are a great way to practice words and sentences. If a child can not read, they can repeat what the parent or therapist read out. The pictures can be encouraging for the child.

A few books available in book stores that can encourage the /t/ and /d/ sounds are – The cat in the hat, Pete the Cat – train trip, Dazzling digger, Harry the dirty dog. 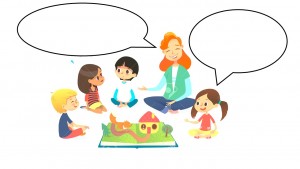 Daily life conversations must be used mostly. Apart from this, play games wherein the child may have to use conversations. An interactive and creative manner to do this is to use Pictures with Speech Bubbles.  You can download scenes from the internet or draw your own in advance. Additionally, you will need to prepare little cards with the target words on them (such as tomato or turtle) which may be somewhat relevant to the scene of the picture. Each person (the adult and the child) will get two cards for themselves, in advance. The game requires each one to fill out conversations for the pictures using the words from the cards. It gets the players to create conversations in a fun way.

Practice of the sounds makes the child better in producing them. However, if the child is making mistakes while using the sound in conversation, then move back to practicing sentences.

There are several ways to build on these sounds. Hope this article provides guidance to begin improving sounds /t/ and /d/. Leave us a comment, we’d love to hear from you!

Subscribe to us to receive our latest articles on articulation therapy ideas!