Why play is important? 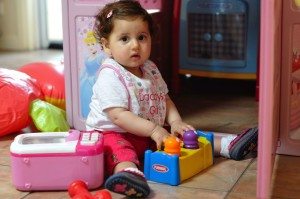 Play is an activity with which a child explores his environment, manipulates it and derives pleasure in doing so. Researchers define play as ‘a process encompassing children’s behavior, which is freely chosen, personally directed and intrinsically motivated’.

Adults assume that play is purposeless and is an unstructured activity that has no result. Often we adults fail to realize that children learn by playing though you can’t always tell what they learn through a particular playing activity. Learning is normally associated with books, school, study and work, and not with play. It’s time we understand that play is a source of great learning and learning always leads to pleasure!

Children are natural learners and discover the world through their encounters with the things in their environment. They learn about space and movement through their reflexes and sense of sight and sound. They learn about the qualities and behaviour of objects by shaking a rattle, rolling a ball across the floor, playing with sand and water, and lining up rows of toy cars and boxes. Through such sensorimotor experiences with things that are hard or soft or things that roll or bounce, the child pieces together very important general concepts about the world.

Play is a great contributor to the child’s social and emotional development. The parent-infant bond is strengthened through play. As infants become more able to process more sensory experiences; they make discoveries that evoke curiosity, surprise and pleasure. You must have not missed signals from your children that invite you to become a part in their development. The feeling of success that infants experience through play gives them the confidence to try new and more challenging tasks. As a result of rewarding and pleasurable encounters with things and people around them, children become more independent and learn to cooperate with others. Cooperation enables older children to play with others, to play games with rules, and to play without always having to have the game their own way.

Play is a reflection of a child’s age, behaviour and cognitive abilities. Infants play by repeating actions that are pleasurable in themselves such as sucking. After this stage play involves a purpose as the senses become more coordinated and infants can control their movements to reach a goal. Slowly the infants acquire experience and they learn to vary their actions. When two or three year olds are able to represent actions mentally, they begin to engage in symbolic play or make believe. This gives them further opportunities to assimilate more complex social and emotional experiences. At first, the child’s make believe play often reflects an inaccurate and exaggerated concept of reality. Gradually, this play begins to mirror a more neutral view of the world. Along with this, the child is able to play games that have rules and require cooperation.

This is the first stage of play. Babies and toddlers (birth to around two) are in this stage. They love to be with family members and also enjoy time by themselves. They are very busy exploring and discovering their new world. These very young children tend to play alone regardless of whether other children are in the same room.

The second stage of play begins around the age of two and lasts till 3 years. Children play next to each other simply because they are in the same area but actually they are engaged in their own activities. They play side-by-side, watch and listen to each other. At this age they are interested in the same toys and both see the toys as belonging to them.

At this third stage (3-4 years) most children are still playing independently but often do the same thing as other children. For example, if one child puts on a hat, another child will also like to put another hat on. The children will begin to interact through talking, borrowing and taking turns with toys, but each child acts alone. Children in this stage play in a mixed gender group.

This stage becomes quite apparent in the later preschool years, (4-5 years), when children have acquired the skills to interact together for the purpose of play. Speaking and listening skills are more developed so children can communicate with each other. Children can share ideas and tell each other what to do. Communication about play is the critical skill of cooperative play. Children in this group tend to play in same gender group.

Physical maturation is directly proportional to the development of play across these stages. Children who enjoy varied sensorimotor and social experiences may develop certain skills earlier than other children. This varies according to whether the infant is very active or quiet or whether opportunities arise to make discoveries that are required to move from one stage to the other.

Also, the ages mentioned above are approximate, but the sequence is almost constant with all children. Children have to manipulate many round objects during the first two years of life to understand the abstract concept of roundness. They should have walked to and from home many times before they can draw a map of neighbourhood. They should have played with many objects and rearranged them in many different ways before they can discover that quantity is not influenced by appearance.

Renowned psychologist Piaget who has worked extensively in the areas of cognitive development and play suggests that development of play is not linear. Children enter a new stage when the can perform tasks that they could not perform earlier. Old behaviours don’t always disappear. Children need to repeat familiar behaviours and adults may notice that many old behaviours reappear when kids get older. For example,

when a child learns to walk, he may sometimes come back to crawling. After children begin to talk in complete sentences, they may revert to baby talk for a short period of time. He may offer logical explanation to things, but return to childish explanations to a few other things for sometime.

Learning through with it is the child’s work and it can be frustrating and tiring for parents. Parents should understand that there may be times when children need to go back to old, familiar behaviours to comfort themselves or to restore confidence when they are learning more challenging skills. Play can be a means of assimilating new things and also sometimes a harbour when children feel frustrated or neglected.