Intellectual growth is an ever expanding process which accumulates and combines all that is learnt by the child as he is growing. There are various stages of cognitive development and all of them are interlinked. It’s not like stair steps, in which moving from one step to the other means forgetting the previous step. It is an additive progression where the preceding experiences play a mighty role in the succeeding ones.

For example as a child understands that not all four legged animals are dogs, he doesn’t forget how a dog actually looks like. He might club horses, donkeys, zebras and cows all under the ‘horse’ category

, but eventually he learns to sort out all of them like an adult. 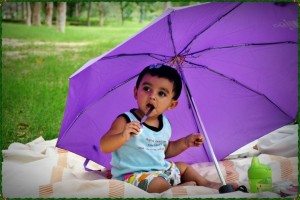 Psychologists and researchers delineate four big stages of cognitive development. (Piaget, 1963) These stages are from birth till late adolescence.

Most behaviours during this stage are reflexive. That is, the child interacts with his environment in physical and untrained ways. There is hardly any manipulation of ideas. The cognitive development occurs swiftly in this stage. Examples include –Preoperational Thought (Two to Seven years) – This is the most brisk period of language acquisition. The child can conceptualize and categorise things in his environment and can solve physical problems.

During this period, children use the ideas learnt in the first two years to form higher concepts. Children at this age are not able to reason from their own experiences about things outside their range as older children are able to do. For example – A two year old child might expect a wooden block to float in water because he has seen a plastic block float. He may focus only on one aspect of the object or might construct ideas that are inaccurate due to his limited experience.

Read detail about Activities to improve cognitive skills in Dementia

The child has the ability to think sensibly in dealing with real physical problems. During this stage, children can assume other people’s point of views and begin to solve problems using logic when real objects are absent. Example – children begin to pretend by collecting and organizing information about what it is like to be a fire fighter, a parent, a doctor, a teacher, a store keeper etc.

Intellectual abilities are fully developed. The child is able to think abstractly. He can solve problems mentally, and he can reason rationally