What is Attention Deficit Hyperactive Disorder?

Attention Deficit Hyperactivity Disorder (ADHD) is a developmental condition and one of the most common disorders seen in children. As the name suggests, it involves difficulty in holding attention, staying focused, difficulty controlling behaviours and over activity or hyperactivity. The term Attention Deficit Disorder (ADD) is also used for children who have poor and limited attention but are not hyperactive.

These symptoms make it difficult for the child with ADD/ADHD to carry out the tasks given to him at home or at school.

Many brain imaging studies reveal that the brain of a typical ADHD youth is normal but delayed in maturation by roughly 3 years. The most affected areas in the brain are responsible for thinking, planning and paying attention. The tissue called corpus callosum which connects the two hemispheres of the brain shows an abnormal growth pattern. Due to these delays in maturation of the brain tissues, the affected child shows the hallmark symptoms of the disorder.

As of now there is no cure for ADHD, but researchers are developing many tools and ways to improve the symptoms. Intervention of children with ADD/ADHD helps in alleviating the signs and symptoms and aims at making them independent and successful. 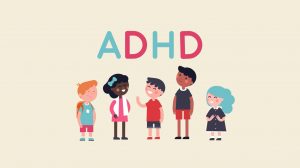 What are the symptoms of ADHD in children?

All children show some sort of hyperactivity and inattentiveness in some form or the other. But children diagnosed with ADHD/ADD have these symptoms in a more severe manner. Depending on the symptoms, this condition has been classified into 3 subtypes :

In this the child shows most of the features (six or more) in the inattention category and fewer than six symptoms of hyperactivity-impulsivity are present, although little bit of hyperactivity-impulsivity may still be present. Children with this subtype are less likely to act out or have difficulties getting along with other children. They may sit quietly, but they are not paying attention to what they are doing. Therefore, the child may be overlooked, and parents and teachers may not notice that he or she has ADHD. Following features can be listed for the this type –

In this the child has most of the signs (six or more) are in the hyperactivity-impulsivity categories. Little inattention may also be present. The following features are noted:

How is ADHD diagnosed?

ADHD in children is diagnosed using the widely accepted Diagnostic and Statistical Manual (DSM) of Mental Disorders. There are many other observations and tests run by Child Psychologists/Psychiatrists who confirm the presence of the disorder. Speech Language Pathologists, Occupational Therapists and Special Educators further help in understanding the communication, sensory and conceptual learning needs of children diagnosed with ADHD/ADD.

What are the causes of ADHD?

Researchers are not sure what causes ADHD, although many studies suggest that genes play a large role. ADHD probably results from a combination of factors. In addition to genetics, scientists have outline environmental factors, and are studying how brain injuries, nutrition, and the social environment might contribute to ADHD.

Genes – Research shows that ADHD can be genetic. Children who have ADHD usually have at least one close relative who also has ADHD. And at least one-third of all fathers who had ADHD in their youth bear children who have ADHD. The majority of identical twins share the trait.Researchers are looking at several genes that may make people more likely to develop the disorder. Knowing the genes involved may one day help researchers prevent the disorder before symptoms develop. Learning about specific genes could also lead to better treatments.Children with ADHD who carry a particular gene, have thinner brain tissue in the areas of the brain associated with attention. Research also showed that the difference was not permanent. As children with this gene grew up, the brain developed to a normal level of thickness. Their ADHD symptoms also improved.

Environmental factors –  Cigarette smoking and alcohol use during pregnancy and ADHD in children.Preschoolers who are exposed to high levels of lead, which can sometimes be found in plumbing fixtures or paint in old buildings, may have a higher risk of developing ADHD.

Food additives – Research indicates a possible link between consumption of certain food additives like artificial colors or preservatives, and an increase in activity. Although there is no confirmation of these studies yet.

What are the other associated problems with ADHD?

Some children diagnosed with ADHD/ADD may have conditions which coexist with the disorder. One or more of the following may be present.

What are the treatment/Intervention options for children with ADHD?

Since ADHD involves a host of symptoms, there are many approaches to deal with this condition. There are treatments to reduce the symptoms and to increase the functioning of such individuals. These include medications, behavioural treatments, speech language therapy, occupational therapy and special education.