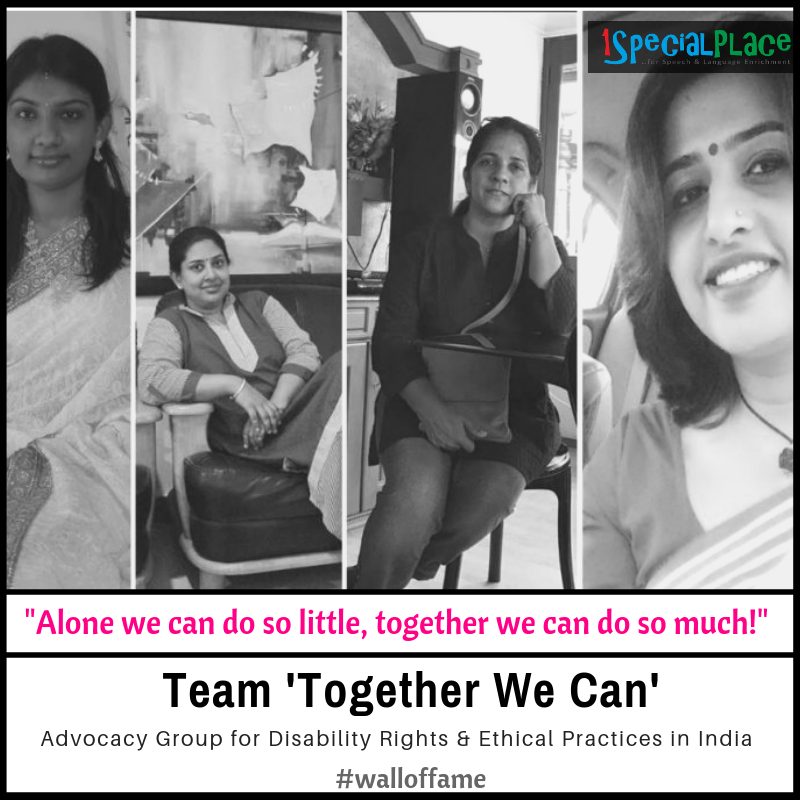 Candid With Together-We-Can, Recently we came across a power packed group functioning out of their social media page, which has currently crossed 10,000 followers. TogetherWeCan is a group effortlessly working on issues related to children, their disability rights, mental health, family empowerment and rehabilitation.

Yes this group does exists where you, as parents can empty all your worries regarding your children and get help in ways you would not have ever imagined!!! So in this autism awareness month we at 1Special Place are sneaking into awesome work TogetherWeCan is doing.

It is primarily an advocacy group working towards bringing in transparency, ethics, accountability and inclusion in the disability sector.It was initiated in wake of reports of malpractice and abuse within the private therapy centers in Kochi, Kerala. We soon realized it was not just restricted to Kochi or Kerala, it was rampant across the country.

They are a group of like minded parents, professionals and just about anyone interested to live in an inclusive society.Through their active petitions and lobbying they have urged the Government of Kerala to publish the Draft Guidelines for therapy centers. It’s a huge step in the right direction to empower the parents and their children for every right they are entitled for.

The objective is also to move to a Rights based approach from a “Charity” or “Service” approach of working in the disability sector.

When was it formed and how eventually did it grow ?

Ms. Preetha, parent of Shiva, 10year old, was the first parent to actively say a YES to “let’s do something” about this situation when her son , then 6 years broke his hand during a so- called occupational therapy session in a private therapy center in Kochi, Kerala. She claims that it’s a parents’ duty to make the environment more friendly and favorable for their children. She enjoys including her son in each and every activity, a family with neurotypical child would be doing.

Ms. Seema Lal , external PhD student at VU Amsterdam with the backing of The Banyan Academy for Leadership in Mental Health, had been working closely with Preetha then and been listening to various such incidents from several parents but none were willing to take it forward and raise their voice.

She says- “it is most stressful to work with professionals who call themselves “experts” in the field and are obstinate in their thinking and unwilling to even listen to a parent perspective. The vulnerability of parent is blatantly clear and so is the power struggle which paves the way for abuse of all kinds.”

With the alarming increase in diagnosis of neurodevelopmental disorders, autism in particular, the disability sector becomes a perfect for both business and abuse thanks to the extreme vulnerability of both children and parents. We glorify disability by calling it a different ability/special need/divyang but fail to provide the basic humane right to safety and dignity of life. Education and inclusion becomes a far cry unless families are empowered to voice for the same – Ms. Seema Lal 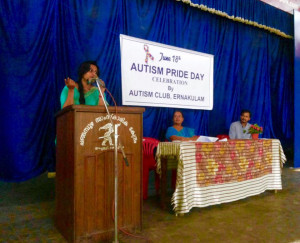 Mother of 14year old child in Spectrum, joined in soon enough. According to her “The sense of injustice that our children who already suffer because of their sensory disorders, communication issues etc have to face such insult and abuse at the hands of experts was a major driving force. Along with social awareness about Autism, it became crucial to include the Neurotypical majority of the public in this crusade to ensure safety, respect and fair therapy interventions for our children.”

The strength for every fight is derived from the absolute innocence with which our children look up to us as their only advocates and champions.-Ms. Padma Pillai

Parent of 25 year old, Brian, on Autism Spectrum, learnt the harrowing experiences of parents and children during therapy through Facebook.

Ms Anita specifies “ Social interaction and communication is lacking and keeping the children at home is not going to help in anyway. So I didn’t worry about the stares. We just lived life the way any family would live. Be it the supermarkets, restaurants, trains, airports, you can always feel those countless pairs of eyes boring into your very soul. That didn’t stop us from going out.”

They started the page which slowly and surely gained attention from parents and professionals across the country and abroad.

Read about Appu, a child on the Autism Spectrum and his wonderful journey.

And the group eventually grew with more strengths joining- 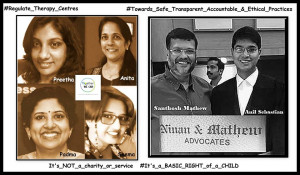 They did grow both personally, professionally and as team. From no parent being willing to open up we had parents from across the country send us video recording and shared openly on social media their experiences with therapy centres both positive and negative.

When people began to see that we did make a difference in bringing the order through from the Child rights commission. The government too started taking notice with the Health Minister responding to us on television, our movement gained momentum.

I believe that it’s our duty to make the world favourable for our kids. I believe that if you don’t make others understand about autism there’s no point in telling that they don’t accept the differences.

How do you all work?

We work mostly through our little WhatsApp group of the team above mentioned.The rest is all via emails, phone calls, and meetings.

Lack of awareness was a major hurdle here. Not just schools that need inclusion, Society as a whole needs to be inclusive. Acceptance, understanding, support and love is all that they need. We are their voice and we all need to speak up and act without fear.  So we move forward together hoping and praying for a positive change.

More about a super artist, Mohit, who is on the Autism Spectrum. He and his remarkable life!

Is your explicit work based only in Kerela? Or other parts of the country too?

For now we are based in Kerala, but we have initiated a PAN INDIA movement 3 other states have expressed interest in taking this forward-RuchikaSethi from Haryana, Aditi Baranwal from West Bengal ,Arpita Yadav from Rajasthan. Our followers on page are growing rapidly and that’s a great sign too.

What groups of children and families do you help?

As long as we find the issue with any child or family genuine, we will support directly or will do our best to network and make sure they get support.

How can parents reach out to you?

twctogetherwecan@gmail.com or message to our page. 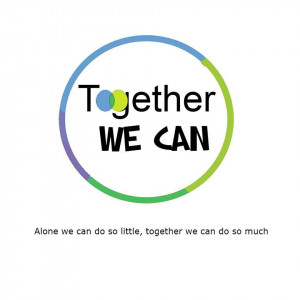 What are your team’s future plans – would you expand the work to other places in India?

Our current PIL is focused on therapy centres only, we will soon be lobbying for inclusive education, regulation and monitoring of special schools, rehab homes/ashrams.There is enough budget allocation and it is the job of the government to provide the same.

Any important message which you all would like to spread to parents of specially-abled children?

We can -Together We Can

Team 1SpecialPlace wishes all the very best to the team of Together We Can in all it’s future endeavours! Leave us a reply to share your story. Subscribe here to read more such inspirational stories. 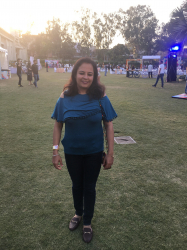