ISHA or the Indian Speech and Hearing Association is the professional and scientific association having members who are Speech language pathologists, Audiologists, Speech Language and Hearing scientists in India as well as internationally. One of the hallmark activities of ISHA is the annual conference. Over the past few years, organisers of ISHA conference have transformed it from being a student centric event to a professional empowering event.

Where was it held?

2019 saw the 51st annual convention of Indian Speech and Hearing Association which was held at our Garden City Bengaluru at NIMHANS convention centre. 51st ISHACON was held from February 7th to 10th 2019. It was divided as Pre-conference (7th) and main conference (8th-10th ).

Who were the speakers?

ISHACON 2019 began with pre-conference with one Skype session along with other plenary sessions. The program not only aimed at creating awareness but also helped to equip teachers in identifying them and also to provide classroom remedial strategies. Students and professionals were enriched with few current research topics like current trends in middle ear analysis by Dr Sreedevi Aithal and Dr Venkatesh Aithal, Voice assessment: Recent developments and implications for clinical practice by Dr. Supraja Anand and other topics like recent trends in Hearing aid technology By Dr. David A Eddins and Music as Language: Neuroscientific prespective on Music and Brain by Dr. Shantala Hegde. 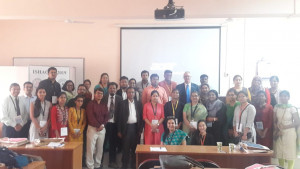 Day 1 of the conference started with 2 Skype sessions and 8 plenary discussions. Few of the topics were by There was also a panel discussion on professional certification process for speech and Hearing by few expertises in the field of speech and hearing. The day ended with inauguration of the conference by Hon’ble Justice Shri S. Rajendra Babu, Former chief justice of India 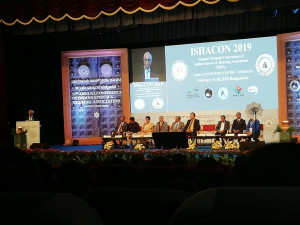 Release of E-souviner and ISHA BC directory was also carried out by Dr B N Gangadhar, Director, NIMHANS.

Oration Award conferring ceremony was also a part of the evening. 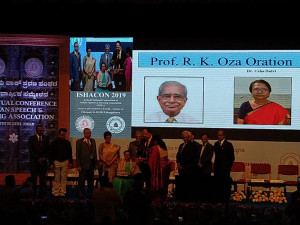 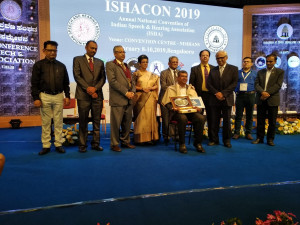 The day concluded with cultural programs by speech and Hearing students

Day 2 of the conference also had interesting speakers giving talk on Videokymography by Ketki Phadke, Oral placement therapy for speech and feeding disorders by Shereen Idiculla followed by Skype session on CAPD by Dr. Gail chermak. 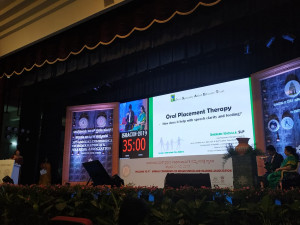 GB meeting of ISHA was carried out. Mr Javara Nayaka and Reuben Varghese were elected as EC members of ISHA, Dr. Krishna Y was elected as President elect, Dr. Pradeep Yuvraj was nominated by EC members as Treasurer and Dr. Neeraj Kumar as JISHA editor.

Day 3 of the conference started with the discussion on what are the current protocols for neonatal screening. Eminent speakers were in the panel of discussion. Simultaneously other interesting discussions were carried out by Dr. Goswami and Dr. Sudhin Karupalli on Aphasia rehabilitation using Telepractice and also on language assessment in adolescents. Few of them were certification for Auditory Neuropathy spectrum disorders, Evidence based approach and also on Technological advances and candidacy for implantable devices 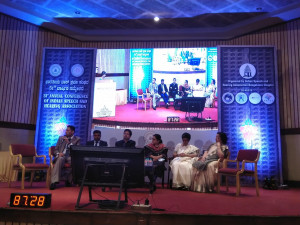 The day ended with an interesting Skype session by Dr. Sonali Nag on Dyslexia: finding the balance followed by valedictory function. 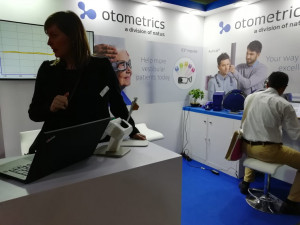 The 51st ISHACON was a grand success and all the delegates went away satisfied with the fare served to them.

Team 1SpecialPlace congratulates all the awardees, participants and the organising committee for such a wonderful contribution.

Leave us a reply.