Articulation Therapy- The sounds /k/ and /g/ are velar stops. Velars refer to place where the air is constricted and momentarily blocked to say the sound – which is the back of the mouth. The sounds require air to be shortly ‘stopped’ and then released by producing a burst of air. Therefore, they are called ‘stops’.

If these sounds are misarticulated, a speech therapist can assist in bringing an understanding of how the sounds are made and then establish them, followed by strengthening and generalizing them at different levels (such as sounds, words, sentences).

The sound /g/ differs from the sound /k/ only that it is voiced.

These sounds are learnt by the age of 4 years. Before the age of 3, several children will substitute the k and g sounds with others sounds. Such as use th for k.

The sound /k/ is not one of the easiest sounds to teach or learn since the tongue placement is right at the back of the mouth. Here are a few activities to help establish the sound:

A speech therapist may use a tongue depressor to assist the correct placement of the tongue. Auditory, visual and sensory feedback are used to allow the child to learn the sound better.

* Note: A speech therapist may assist a child to listen and identifying (i.e. by differentiating) the sound from others, such as /g/ and /b/. This will be taken up before working on establishing the sound. Take guidance from your speech therapist about the need for this and how to work on the same!

The sound, /g/ is produced using the same tongue placement as the sound /k/. The difference, however, is in voicing. Voicing must be turned ‘on’ for the sound /g/. Get ideas on how to teach ‘voicing’ here (link is here-https://1specialplace.com/?p=4211 ).

A fun activity to get the sound /g/ sound going is by pretending to gargle. Show the child how to (dry) gargle. The sound is the most enjoyable part to do with kids. Let the child feel the throat when gargling. S/he must try to imitate the same.

Once the sounds /k/ and /g/ are established in isolation, join them to vowels and other consonants (to form syllables and then words). Forming syllables (i.e. the sound along with other a vowel) are the first steps towards using the sounds in longer utterances. Articulation training requires practice of the sounds at syllable-, word-, sentence- and paragraph-level as well as within conversations.

Practice the sound with a vowel placed either before or after it. Using a visual, such as through a syllable wheel (see here to read more about the syllable wheel) is encouraging for the learner. Games are always a fun way to teach syllables.

One such can be- ‘Rolling the dice’. Stick different vowel -consonant combination (using the target sound e.g. ga/ko/ki) to the different sides of the dice. Let the child or adult roll the dice. Once the dice lands on a side, the child must say the syllable. 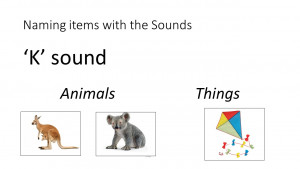 Another game idea to work on the sounds in word level is – Naming items with the sound. First, you can ask the child to name two ‘animals’ (e.g. kangaroo, koala). This can be followed by two ‘ things’  with the sounds (e.g. kite). In a similar manner, other topics can be used.  Photos/pictures can be used to encourage the production of the word or to give clues to the child.

If the child can use the sounds well within words, then move on to practicing sentences. At first, short sentences should be used – two to three-word sentences. Follow this with longer sentences and paragraphs/stories.

Create a list of sentences with the sounds for the child to practice. For example, when practicing the sounds /k/ or /g/ – (1) Cows moo. (2) The green cow ate grass. (3) The goose gaggled through the green grass.

Make practice fun. Play games when strengthening articulation at a sentence level. Here is one such game.

Catch the fish. Paper cut outs of fish can be used. Write sentences on each paper (related to the target sound). The paper can have a paper clip attached to it. By using a magnet attached to the end of a stick, the child can take turns with the adult to ‘fish’ one out at a time. As the fish are taken out, the sentences must be said out loud.

Books are a great way to practice words and sentences. If a child cannot read, they can repeat what the parent or therapist read out. The pictures can be encouraging for the child.

Once the child is comfortable using the target sound within practiced sentences, it is crucial to move towards more independent and spontaneous utterances- that is conversations.

During the daily life conversations, you would like the child to be aware of his/her articulation. Provide guidance to the child when s/he falters. If there are too many mistakes in conversations, it is prudent to move a step back and practice sentences and paragraphs once again.

Here are a few ideas to work on the sounds in conversational level:

There are several ways to build on these sounds. Hope this article provides guidance to begin improving sounds /k/ and /g/.

Subscribe with us to receive the latest articles on articulation therapy.