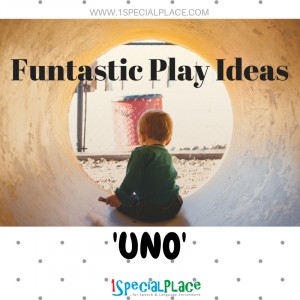 In each article of this series, five different ways of playing with a toy will be discussed. Let’s begin to explore the games and enjoy ourselves!

This article explores play with – Uno.

Uno cards have been popular amongst children for decades now. Original variations of the game have been created to suit younger children and make the game more interesting for all ages! Uno, if played by the rules, can be competitive, challenging yet fun. Through the game many skills can be enhanced, such as- attention, concentration skills, matching, reasoning, turn taking, competitive spirit.

The same deck of Uno cards can be used in other creative ways to build specific skills for young children. This article talks about five such games.

1. What are you wearing? This game is best played with a group of children. In a bag, place 4 to 5 different cards from the Uno deck (do not place the action cards).  A leader will pull out one card at a time and name the color. Then s/he will ask ‘Who is wearing the color…(the name of the color)…?’ The children need to look at their own clothing and those who are wearing the named color need to raise their hand. They can also be expected to do a specific action e.g. the children who have that color can clap their hands / do a jumping jack etc. children can take turns to be the leader. The game continues till all the cards int he bag are drawn. It’s a wonderful game to build socialization while working on color matching, questioning, turn taking, amongst many other skills. 2. What do you have? This game requires two decks of Uno cards so that you can make twelve pairs. These ten pairs would be distributed between the two players.  Each player needs to make pairs (of the numbers and colors) in their hands. By taking turns, each player will ask the other for specific cards, for example – ‘Do you have the card blue 1?’ The player who has only pairs in hands, wins. The game will enhance recognition of number and colors, using questions, taking turns and competing to win. 3. Color matching. This game requires boxes with slots (big enough to fit a card at a time). Four such boxes are needed, one for each color that will be sorted i.e. red, blue, green and yellow. Color the boxes (to match a color) and label them with the name of the color. Use only the color/number cards and not the action or extra cards from the Uno deck.  Randomly mix the cards face down in front of the child. Have the child pick one card at a time and place it in the matching box. Continue this till all the cards are over. The number of cards chosen for the game, depend on the child’s attention level. Use lesser cards if the child is unable to attend for longer.

This game allows skills of color matching, waiting to be enhanced. If two players take turns to play this game, it is wonderful for turn taking. 4. Memory game. This game requires two decks so that five or six pairs of cards can be removed. A game of memory would be played with these pairs. Lay the cards face down in an organized manner. Two players will take turns to pick up two cards at a time. The aim is to pick up matching cards (the pairs) during the turn. Replace the cards to their original place whenever pairs are not picked. If pairs are picked, remove them and keep them beside the player who picked the pair. Continue the game till all the cards are removed.

Skills of matching, language building, memory, attention, and turn-taking can be furthered here. Initially make a sequence of only 3 cards and move to a larger numbered sequence as the child gets more comfortable with the game. Additionally, for a beginning learner of the game, let the child choose from selected few cards to recreate the sequence. The child will need some attention and matching skill to be able to play this game.

Hope you’ve enjoyed the ideas. Give us feedback. We would love to hear from you!

Don’t forget to subscribe to us to receive our most recent articles in your inbox!